Lung researcher Dr. Camille Ehre felt like she was flying a drone over a dense forest, looking for poisonous apples on the ground or in the swaying trees. For more than a month, she piloted her powerful microscope over an area 12 millimeters in diameter populated by cells from the lungs’ airways. Zooming in and out, she hunted between and below their hairlike protrusions for the infectious, spiky orbs of COVID-19.

When she spotted the virions, each about 80 nanometers around, she was shell-shocked by their strength and cunning. COVID-19’s ground assault was formidable.

“The virions just ooze out of the cells,” said Ehre, an assistant professor of pediatrics at UNC. “It’s astonishing numbers that are coming out of a single infected cell. The things I’ve seen under that microscope are pretty scary.” 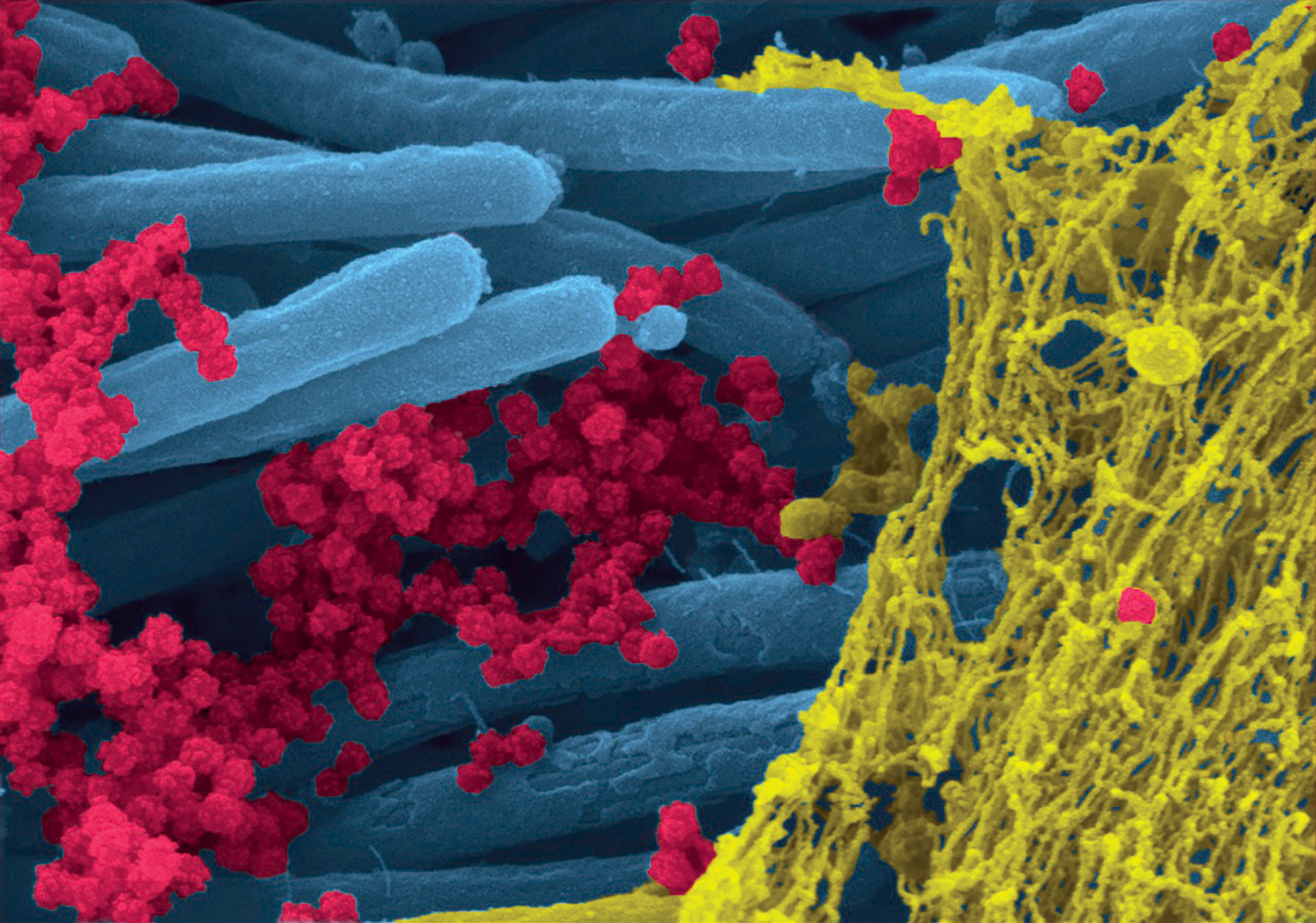 Those airway cells and their cilia — the hairs that rhythmically beat above them — usually are one of our lungs’ best defenses against foreign invaders. They clear away bacteria and virus particles like windshield wipers and prevent pathogens from entering the lobes of the lungs. To the coronavirus, however, our ciliated cells are co-opted weapons of mass production, tiny manufacturing facilities that churn out new COVID attackers at an exponential rate. As they do, the cilia continue to swish back and forth, spreading new virions to new cell hosts.

Ehre’s aerial images of this cellular zombie apocalypse, published in The New England Journal of Medicine in September, delivered a sobering visual message about the unrelenting power of the virus and the preventive measures crucial to overcoming it. That’s because the attack mounted in our bronchial airways occurs first in the ciliated cells of our nasal passages, Ehre said. The sheer number of virions produced from even one infected cell helps explain why many COVID patients lose their sense of smell.

“We know that the nose is the region where the virus starts replicating,” she said. “So even if you are asymptomatic, and the virus only replicates in your nose, you can prevent the transmission to the next cell in a different nose by wearing a mask.

“Wear a mask,” she stressed, “and wear it on the nose, not under the nose.”

In the days that follow a cell’s infection, Ehre observed, it becomes so engorged with COVID particles that it detaches from the epithelium, or lining of the airway, and begins floating. As it does, virions continue to replicate.

“They are mobile factories for the virus at that point,” she said. “If you inhale this high load of viral particles deep down into your lungs, that’s when you start having shortness of breath and pneumonia that can cause death. At the same time, if you exhale them out of your nose, you can transmit the virus to others without even knowing you have it.”

When she found the infectious, spiky orbs lurking in lung cells, Dr. Camille Ehre was shell-shocked by their strength and cunning. COVID-19’s ground assault was formidable.

Before the pandemic, Ehre studied cystic fibrosis and its relationship to one of the lung’s other natural defenses: mucus. The sticky substance that is produced by nonciliated airway cells usually traps stray particles in its netting before the cilia bounce both the mucus and its hangers-on to the throat.

But coronavirus changed her focus. Last spring, Ehre asked Ralph Baric — the Kenan Distinguished Professor of epidemiology, whose lab was among the first to receive COVID-19 for research — to infect a culture of bronchial cells so she could study how the coronavirus interacted with mucus. She expected to see virions trapped in the mucus; instead, the airway combatants mostly repelled one another. A mutually negative electrostatic charge could be why, she said.

“I thought I would see mucus as a hero for a change,” said Ehre, who is accustomed to seeing CF patients whose breathing struggles are caused by the overproduction of thick mucus.

“We do see a spike in mucus production when a cell is infected with COVID, but it’s in vain. And now you also need to clear that mucus, which is the job of the ciliated cells. But if they are taken over by virions and dying, they won’t be able to clear it out of the lungs.”

Her time under the microscope with COVID has spurred Ehre’s interest in how infectious diseases behave in the lungs. Now, she is looking at how coronavirus impacts the airways of asthmatics, diabetics and CF patients. Ehre’s already “booming” lab also is investigating how a customized nasal spray or an increase in goblet cells, which produce the protective layer of mucus, might limit the virus’ entry to airways.

Ehre, who has not taken a day off work since December 2019, admits that those swaying cilia trees and poisonous COVID apples visit her in her sleep. She flies through her days on adrenaline, mission-focused while raising young children who are homeschooling during the pandemic.

“During this shutdown, the only thing I was thinking about was, ‘What can I do to help?’ ” Ehre said. “We don’t slow down. I’m very motivated — more than I’ve ever been. My husband tells me that we need to take a break, and I always say, ‘Yeah, next week … maybe.’ I feel a sense of urgency that I’ve never felt before.”