Sara Schairer and Burrell Poe leading a workshop. “If we are all products of our systems, how do we make these systems compassionate? … What if, from the very beginning, compassion is the anchor for all our social institutions?” (Photo: compassionit.com)

Sara Schairer didn’t know what to expect from the inmates at the R.J. Donovan Correctional Facility, which counts the Menendez brothers and Sirhan Sirhan among its population. The maximum-security prison stripped away their humanity, from the abysmal food to the cramped cells that sweltered in the heat of the California desert.

But Schairer knew that the 30 Donovan men who had volunteered to meet with her for eight weeks of training in compassion — a skill so rarely modeled in the men’s lives that many could scarcely define it — risked their safety just by participating.

“Compassion can be a death sentence in prison,” says Schairer. Hostility and violence are part of prison life. “You typically stick with your own racial group, and there are pretty clear boundaries around who you can even talk to. The men referred to it as ‘the politics.’ ”

Schairer — whose San Diego-based nonprofit, Compassion It, conducts training in compassion cultivation for schools, community organizations and corporations — led the men through meditation and homework exercises designed to help them recognize self-worth, acknowledge the suffering of others and take action to help ease others’ pain. By the end, the inmates found their way through those isolating “politics.”

“I am now able to talk to others without any judgment and also able to listen more without interrupting or give advice unless asked, but just listen,” wrote one of her Donovan students after his training in 2018.

“I am able to put aside others’ faults and know that they are suffering as I am,” wrote another. “We are the same in a lot of ways.”

Schairer’s own suffering led her to found Compassion It. In 2008, she was reeling from an unwanted divorce; the split had come on the heels of losing her father, who had been struck by a car while jogging. After leaving a high-paying pharmaceutical sales job to stay home with her 18-month-old daughter, she found herself battling depression and looking for meaning.

One day, she caught an interview with the author Wayne Dyer, an advocate for practicing positive thinking and kindness, who said teaching compassion to children could solve the world’s problems.

“I couldn’t stop thinking about it,” Schairer said. “By the end of that day, I saw the word compassionate as a verb.”

She pivoted toward social entrepreneurship, using the talents honed through her business career. But instead of pushing a product, she was encouraging taking compassionate action. 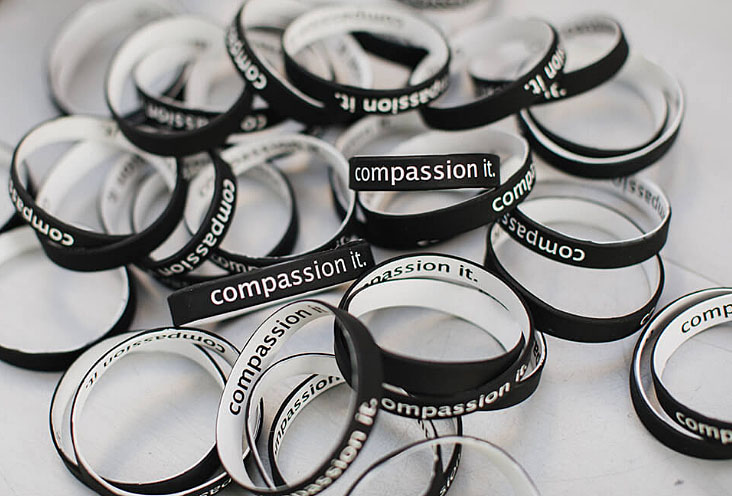 One tool she created to reinforce the practice is a reversible, two-tone wristband emblazoned with “compassion it” on each side. The wearer flips the band inside out after doing a daily good deed. They come in pairs to “wear one, share one”; more than 155,000 are circulating on five continents. An example of how they work: In 2018, a Pennsylvania teenager inspired by the wristband she wore daily befriended a troubled classmate and was able to ward off an act of violence at their school.

After launching Compassion It, Schairer became certified to teach compassion cultivation through a one-of-a-kind program at Stanford University’s School of Medicine. The deep work comes in helping people of all ages understand the nuances of compassion and to use it to spur action beyond awareness and empathy. At its core, compassion is more than just understanding another person’s suffering, she says. It’s a willingness to alleviate it.

“In workplaces that have introduced mindfulness programs, there has been criticism that what some companies are really saying is, ‘Now you should be able to sit in discomfort and be OK with working harder and longer,’ ” said Schairer, who has led workshops for executives and employees at LinkedIn and Kaiser Permanente. “But compassion training is about creating a culture where people are supportive teammates, a culture of belonging where people can be vulnerable and make mistakes. It has a different flavor.”

Schairer’s experience at the Donovan Correctional Facility taught her that, as much as individuals benefit from compassion training, the systems that brought those men to the desert in the first place might need it even more.

For Schairer and her partner, Burrell Poe — who directs Compassion It’s outreach in Chicago and also is a graduate of Stanford’s compassion program — that realization strengthened in 2020, a year that alternated between the dystopian environment of an isolating pandemic and heartbreaking examples of injustice, revealing the divisive consequences of systemic racism and health care inequality in the process. Schairer and Poe see compassion training — which also challenges participants to examine how their implicit biases influence their actions toward others — as a root solution for social ills.

“That’s something Burrell and I talk a lot about is, how do we institutionalize compassion?” said Schairer, who earned a journalism degree at Carolina and with Poe led a series of virtual workshops for UNC athletes in October. “If we are all products of our systems, how do we make these systems compassionate? Imagine police departments whose main focus is caring for the community, is compassion. What if, from the very beginning, compassion is the anchor for all our social institutions?

“We need to weave our way through all of these different systems to really make an impact.”

“Something we need for humanity”

To that end, Compassion It is partnering with the University of California at San Diego, where Schairer also teaches, to develop a compassion cultivation curriculum tailored for police officers in the city of La Mesa. (In May, La Mesa police were embroiled in controversy over the arrest of a Black man, whose charges were later dropped, and over their handling of crowds protesting George Floyd’s death in Minnesota. A 59-year-old woman suffered a head injury after being hit with a beanbag round fired by police during the protests.)

Schairer also is talking with the San Diego Police Department about a similar project.

“We’re going to be working closely with officers to help create something that can be implemented and scaled,” she said.

Both Poe and Schairer say that compassion training should be included in any police reforms that result from Black Lives Matter protests — not just to benefit the public that officers serve but to prevent burnout and improve officers’ mental health.

In Chicago, where neighborhoods are segregated by race and income, Poe works to “build relationships between people who normally wouldn’t find each other.” He brought together high-level business executives from Chicago’s Loop district and former gang members from the west side for a compassion workshop. Taking turns, each person discussed a stressful moment in their lives, Poe said, and wound up seeing more of themselves in each other than they had predicted.

“All of our labels and all these other experiences throughout our lives … they just texture us,” said Poe, who also leads the Chicago Police Department in antibias training. “They don’t change the fundamental things about being a human being.”

That fundamental humanity also is on display in the daily Zoom sessions Schairer has led among  80 Italians and Americans since the pandemic began, building an international community that now views itself as family. After a year that will be remembered for sorrow and strife, both Schairer and Poe believe Compassion It’s most significant contributions are yet to come.

“This idea that compassion can solve all our social problems?” said Poe, a U.S. Army veteran from Chicago’s west side. “In a violent city like mine? When Sara first told me about her idea, I was like, ‘What are you talking about?’ It was the craziest thing I’d ever heard. But this is not a luxury. This is not just a program. This is something we need for humanity.”